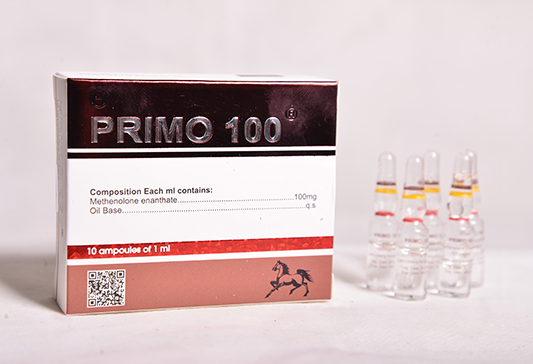 Primobolan is a Dihydrostestosterone (DHT) derivative, landing it in the family of DHT-derivatives and analogues. Primo is a modified from of DHT, where it contains a double-bond between carbon atoms 1 and 2 in the Dihydrotestosterone structure. This is known to assist in the stabilization of the -3keto group which in turn increases the anabolic strength of the hormone. A -1methyl group is also added to the hormone, which is responsible for allowing the hormone to resist hepatic (liver) metabolism and breakdown. The oral format of Primobolan holds an Acetate to the -17beta-hydroxyl group on the chemical structure. This allows the oral anabolic steroid to be resistant to oxidation and hepatic breakdown through oral administration. The oral form of Primobolan has demonstrated effective oral bioavailability in studies as both in its Acetate format as well as its un-esterified format [5] [4]. Esterification will now be explained in more detail.

The addition of this ester augments the hormone’s release rate and half-life to favor a longer window of release. The primary reason for the augmentation of its half-life and release rate is because once Methenolone Enanthate enters the bloodstream, enzymes work to break the bond between ester and hormone, which takes a varying amount of time. The end result is that of the ester being removed from the hormone by these enzymes, and the result after this is pure Methenolone that is free to do its work in the body. This process of enzymes removing the ester from the hormone to which it is what is responsible for the slower release rates. When the Enanthate ester is attached to Methenolone, creating Methenolone Enanthate, the half-life of Primobolan is now extended to 10 days, providing a slower release and activity of the hormone.

Like most anabolic steroids at the time, in the early 1990s it was eventually pulled from all markets and Schering ceased production as a result of the increasingly growing mass hysteria surrounding anabolic steroids and the growing anti-steroid sentiment in the media of the time. As a result, pharmaceutical Primobolan manufactured by Schering is today only sold in a small select number of countries across the word, such as Spain, Turkey, Japan, Paraguay and Ecuador.

As far as the oral variant is concerned (Methenolone Acetate), it too was pulled from the majority of markets and ceased production as well. However, pharmaceutocal grade oral Primo can be located in japan and Suth Africa. In general, pharmaceutocal grade pral Primobolan products are even more rare than the injectable, and only small amounts of 5mg and 25mg tablets from Schering may still be located on the market in extremely rare and small amounts.