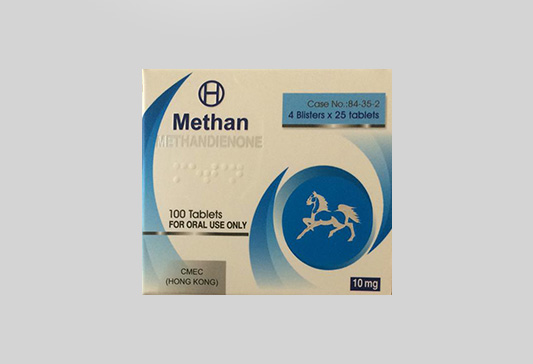 Metandienone, also known as methandienone or methandrostenolone , is an androgen and anabolic steroid (AAS) medication. It is also used non-medically for physique- and performance-enhancing purposes. It is often taken by mouth.

Metandienone was formerly approved and marketed as a form of androgen replacement therapy for the treatment of hypogonadism in men, but has since been discontinued and withdrawn in most countries, including in the United States.

Metandienone is used for physique- and performance-enhancing purposes by competitive athletes, bodybuilders, and powerlifters.It is said to be the most widely used AAS for such purposes both today and historically.

Androgenic side effects such as oily skin, acne, seborrhea, increased facial/body hair growth, scalp hair loss, and virilization may occur.Estrogenic side effects such as gynecomastia and fluid retention can also occur.Case reports of gynecomastia exist. As with other 17α-alkylated steroids, metandienone poses a risk of hepatotoxicity and use over extended periods of time can result in liver damage without appropriate precautions.

Metandienone binds to and activates the androgen receptor (AR) in order to exert its effects. These include dramatic increases in protein synthesis, glycogenolysis, and muscle strength over a short space of time.[medical citation needed]

While it can be metabolized by 5α-reductase into

potent AAS, the drug has extremely low affinity for this

enzyme and methyl-1-testosterone is thus produced

in only trace amounts.

Do not Refrigerate. Do not Freeze.